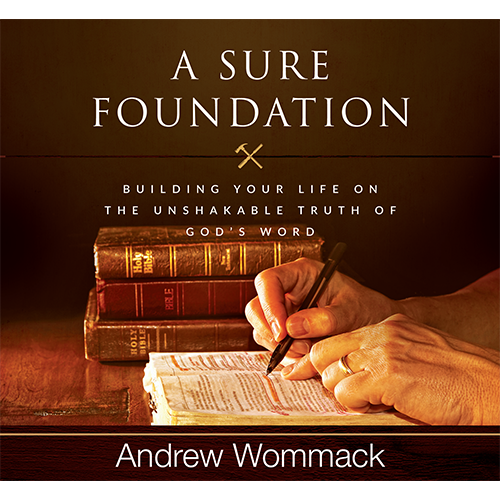 Sure Foundation: Integrity of God's Word

This series is a summary of the first four teachings Andrew gave in the U.S. Charis Bible College. They were taken directly from his Gospel Truth television broadcasts. God's Word has to be the foundation of everything a Christian believes. Most problems that Christians have come from an ignorance of God's Word or wrong teachings from His Word.

Laying a Sure Foundation
Christian belief has to be founded on the facts of God's Word and not on intuition or feelings. Our limited view isn't sufficient to understand life based on our personal observations. As Jeremiah said, "LORD, I know that the way of man [is] not in himself: [it is] not in man that walketh to direct his steps." We must have God's perspective and revelation to navigate this life. That's why God gave us His Word. It is the only sure foundation to base our lives upon.

Got a Need? Plant a Seed!
The Word of God is the seed of God's kingdom. In the same way that there cannot be a physical harvest without planting a seed, so we cannot receive a spiritual harvest without planting the seed of God's Word. Many Christians are frustrated because they haven't received what they need from the Lord, but the truth is, they haven't planted the seed. That's like a farmer who is angry that he doesn't have a crop, yet he's never planted any seed. This is a spiritual law that cannot be ignored.

The Sower Sows the Seed
This teaching covers Jesus' parable of the sower who sowed seed. Jesus said this parable was the key to understanding all His teachings. These truths unlock the revelation of Jesus' ministry, enabling us to have life as He has it.

John the Baptist
The way Jesus dealt with John's unbelief is a great insight into just how powerful God's Word is. Jesus said all kinds of complimentary things about John after his messengers had departed. All He gave to John was the Word. Today's "touchy-feely" climate puts feelings and emotions ahead of everything else. Jesus respected John so much that He didn't minister to him on an emotional level, but gave him the seed of the kingdom — God's Word.